Now – almost in the middle of the year – the first officially confirmed Google Core Update 2021 since December 2020 is coming. The next one should follow in July.

Google Core Updates are deep interventions in the ranking algorithm and can have a major impact on SERPs (search result pages) and industries.

On Twitter, the Google SearchLiaison announced that the rollout for the update has begun. 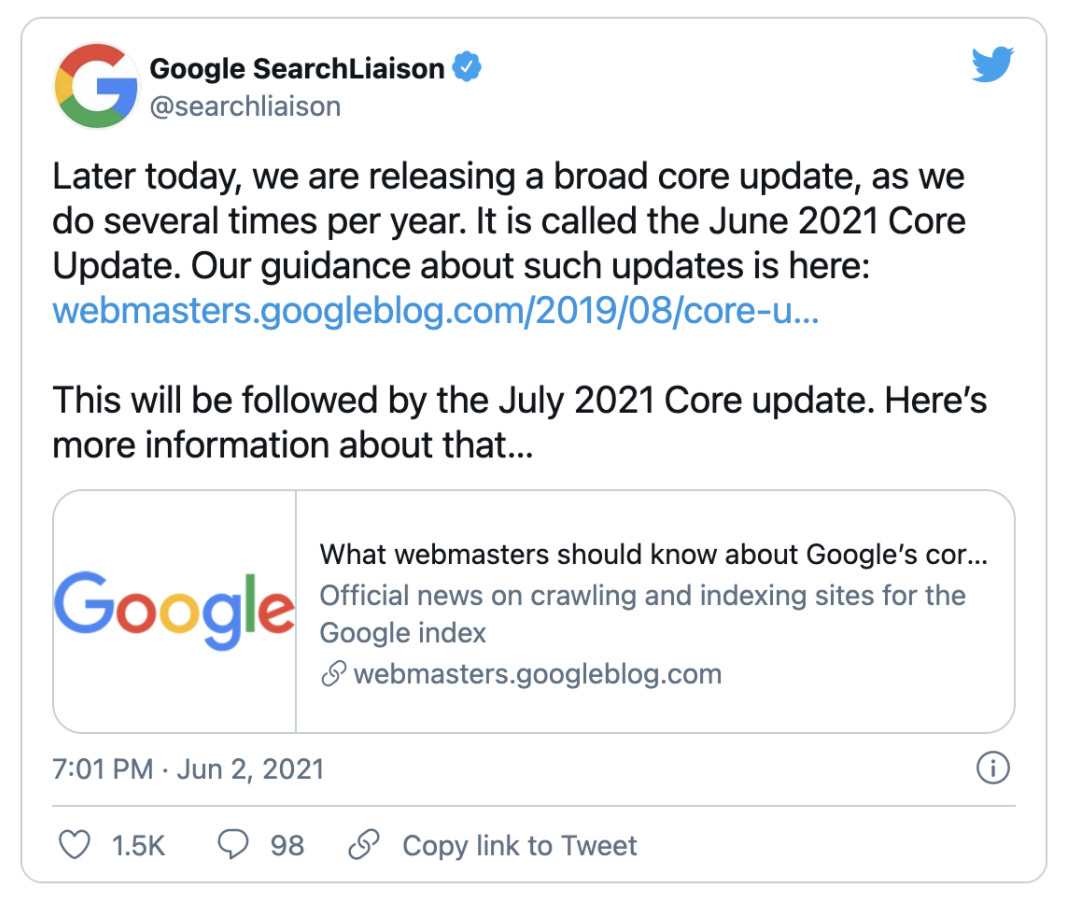 What webmasters should know about Google’s core updates

It is likely to take a week or two before effects are seen. During this period there can be various fluctuations in ranking. However, these do not have to be final, as the next update will follow in July 2021, which may lead to some ranking reversals.

In a current blog post [link], the head of Google Search Liaison Danny Sullivan provides more information about the Google updates. He explains that Google search is optimized a thousand times a year with updates and that this process of evaluating search results could reduce the number of irrelevant results for searchers by 40 percent over the past five years.

“We want site owners to understand these changes aren’t because of something they’ve done but rather because of how our systems have been improved to better assess content overall and better address user expectations. We also want to remind them that nothing in a core update (or any update) is specific to a particular site, but is rather about improving Search overall.”

According to this, there is nothing that website operators could actively do to cushion ranking fluctuations in the context of such updates. The changes to the algorithm will help Google in the long term to display the most relevant content for searchers. In order to get to the top of the search results, it is important to always produce relevant content on the homepage for the active target group.

We would be happy to advise you on how to optimize your website for an optimal Google ranking.

Let us call you.

Google My Business – Visibility & Online Presence For Your Company

You can find out more about which cookies we are using or switch them off in settings.

This website uses cookies so that we can provide you with the best user experience possible. Cookie information is stored in your browser and performs functions such as recognising you when you return to our website and helping our team to understand which sections of the website you find most interesting and useful.

Strictly Necessary Cookie should be enabled at all times so that we can save your preferences for cookie settings.

If you disable this cookie, we will not be able to save your preferences. This means that every time you visit this website you will need to enable or disable cookies again.

Please enable Strictly Necessary Cookies first so that we can save your preferences!